India and the G20 Presidency

The G20 or the Group of 20 is the premiere multilateral forum established as a platform for governing the global economy. It brings together the world’s majority of the economies. The member countries of the G20 account for around 85% of the global GDP, 75% of global trade and 2/3rd of the world’s population. The members of G20 are Argentina, Australia, Brazil, Canada, China, France, Germany, India, Indonesia, Italy, South Korea, Japan, Mexico, Russia, Saudi Arabia, South Africa, Turkey, the United Kingdom, the United States and the European Union.

The G20 meets every year since 1999, with the leaders meeting at the G20 Main Summit annually since 2008. In addition to the G20 summit, ministerial meetings, sherpa meetings and engagement groups’ meetings are organised throughout the year, where they address every contemporary issue and challenge at global level. In addition to broad macro-economic policy, the G20 declarations now places a greater emphasis on global concerns such as climate change, energy transition, health, digital economy, counter-terrorism and migration. These declarations influence the member countries’ policies.

At the conclusion of the 17th G20 Summit in Bali on November 16, 2022, Indonesian President Joko Widodo handed the G20 Presidency to Prime Minister Narendra Modi. India's G20 presidency, according to PM Modi, will be "inclusive, ambitious, resolute, and action-oriented." He stated that it will be India's goal to have the G20 operate as a global catalyst for advancing collective action. India officially assumed the G20 presidency on 1st December, 2022. This time the troika comprises three developing countries Indonesia, India and Brazil. The theme of India’s G20 Presidency is – “Vasudhaiva Kutumbakam” in other words “One Earth. One Family. One Future”. A number of Jan Bhagidari festivities, a special University Connect event involving 75 educational institutions from throughout the nation, the illumination of 100 ASI monuments with the G20 emblem and colours, and other cultural efforts served as the start of India's presidential term agenda. India’s G20 Presidency is inviting Bangladesh, Egypt, Mauritius, the Netherlands, Nigeria, Oman, Singapore, Spain and UAE as guest countries, as well as the International Solar Alliance, Coalition for Disaster Resilient Infrastructure and the Asian Development Bank as guest international organizations. 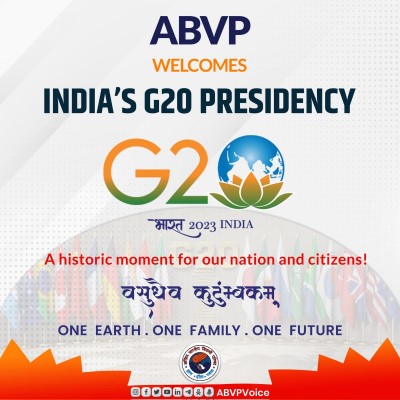 Over the past 3 years and more, there has been a great deal of instability and volatility in the world. The COVID-19 pandemic had an adverse effect on all 200 nations of the world in terms of social, political, and economic spheres. Global effects of the ongoing battle in Europe include high inflation, oil, and food shortages, unmanageable debts, supply chain disruptions, and more. The global economy and community are also being distressed by issues like terrorism, climate change, nuclear proliferation, and achieving the Sustainable Development Goals (SDGs). India has clearly signalled its development as a prominent participant on the international stage by assuming the G20 Presidency. While the majority of nations, both developed and developing, have found it challenging to effectively handle the problems posed during the COVID-19 pandemic and the Russia-Ukraine conflict, India has been able to successfully navigate the headwinds it has faced over the last 3 years, credits to its bold and visionary leadership and prudent policies.

In addition to the Working Groups under Sherpa Track and Finance Track, there are 10 Engagement Groups (EGs) which bring together think tanks, women, civil societies, youth, parliamentarians, labour, researchers, businesses and other stakeholders of the G20 countries. These EGs are independent groups that are led by organisations of the host country and their delegates from the member countries develop policy recommendations that presented to the G20 Leaders for consideration. The Youth 20 or Y20, an official engagement group of G20, aims to provide young people the opportunity to voice their views and ideas to the G20 leaders. It serves as a forum for open dialogue and the creation of a consensus communiqué that encompasses a number of recommendations to the G20 agenda. The Presidency receives this and distributes it to the other Leaders. The Department of Youth Affairs has been tasked with the responsibility of planning the Y20 Summit 2023 along with Dr Syama Prasad Mukherjee Research Foundation as the Y20 Secretariat. The Y20 is keen to engage relevant stakeholders, including youth organisations, student organisations, universities, colleges and G20 EGs. Y20 will hold more than 500 outreach events in universities and colleges throughout India ensuring that the G20 priorities are discussed by young people from every corner of the country. In Y20 India 2023, the delegates are expected to discuss on the following five themes:

3. Peacebuilding and Reconciliation: Ushering in an Era of No War

These themes will demonstrate the Indian leadership on these issues to both global and domestic audiences and bolster India’s vision of making the G20 summit a truly inclusive experience.

(This article was written by Nivedha Kartheepan, Indian Representative at Y20, on Jan 2023 during the occassion of India taking over the G20 Presidency)