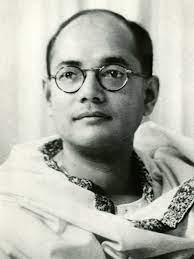 Subhas Chandra Bose, affectionately known as ‘Netaji’ to all of us was an outstanding leader and a legendary figure whose legacy lives on within the spirit of Bharat, whose sole objective was emancipation of Mother India from the British rule of exploitation and oppression and reconstruction of Free India. His zeal to make the country free from colonial rule was comparable to none. Subhas's nationalistic zeal was heightened under the influence of Swami Vivekananda. Vivekananda's call "Say brothers at the top of your voice the naked Indian, the illiterate Indian, the Brahmin Indian, the Pariah Indian is my brother" had the echo within the heart of Subhas.  The personality and character of Bose revitalized and affected the psyche of individuals in South-East Asia in such a way that brought new awakenings in them. He turned lifeless beings into living and thinking men. He was not just another leader in the nationalist movement but a maverick who had an alternate idea of nationalism to that articulated by Gandhi and Nehru. When Bose took over the leadership of the INA from Rash Behari Bose, the support from the people was overwhelming. Bose was able to reorganize the fledgling army and organize massive support among the expatriate Indian population in Southeast Asia, who lent their support by both enlisting in the Indian National Army, as well as financially in response to Bose’s call for sacrifice, “Give me blood, and I shall give you freedom!”  for cause of independence. A former INA soldier, V. Samy said, “The arrival of Netaji Bose in Southeast Asia kindled a new spirit among all Indians who began to believe that India would be free soon. Netaji’s call reached into the hearts and minds of all Indians. His call for total mobilization to free India generated a tremendous response” (Netaji Centre 1992:73). 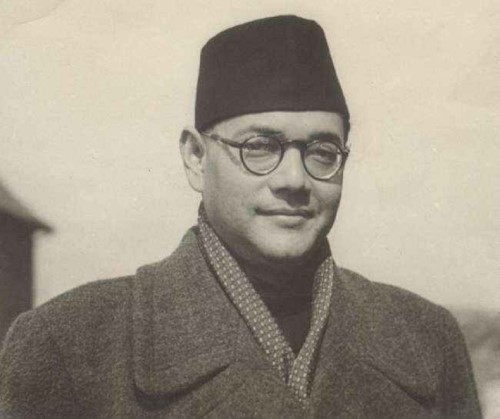 Bose’s father was a government pleader and public prosecutor and later became member of Bengal Legislative Council and acquired the title of Rai Bahadur. However he left the said post and revoked the title as a dissent against repressive policies of the British. Moreover, he was a staunch supporter of Swadeshi. Accordingly Subhas acquired the soul of nationalism from his father. In his initial life, as the student of Protestant European School run by the Baptist Mission, Subhas showed his spirit of patriotism when biased treatment was made against Indian students. His suspension from the Presidency College for being engaged with Oaten Affair in challenging the feeling of racial predominance of the British is a glaring illustration of his nationalism. He communicated his sensation of fulfillment, “I had rather a feeling of supreme satisfaction of joy that I had done the right thing, that I had stood up for our honor and self-respect and had sacrificed for a noble cause."

It was definitely under the influence of his parents that Netaji fostered a significant love for Hindu scriptures from his early life to the last days of his magnificent vocation in the battlefields of South East Asia in 1945. He always had a copy of Bhagavat Gita in the front pocket of his uniform and he would plunge deep into meditation in the dead hours of the night. Bose had accepted the Upanishadic concept of ‘Tyaga’ with which he became determined to tirelessly work for the country and its toiling masses. At the hour of the decree of Provisional Government of Azad Hind, he took the oath, “I Subhas Chandra Bose, will continue the sacred war of freedom till the last breath of my life.” Again, on the day of taking over direct command of the INA on 26 august, 1943, he said, “I pray that God may give me the necessary strength to fulfill my duty to Indians, under all circumstances, however difficult or trying they may be.”

Netaji recalls in his autobiography, he feels “like a thoroughly insignificant being. My parents awed me to a degree”. The zeal to fight against the British Imperialism is reflected in his query “How many selfless sons of the mother are prepared, in the selfish age, the 15 years old Subhas asked his mother in 1912, to completely give up his personal interests and the plunge for the mother? Mother, is this the son of your yet ready”? As he stood on the verge of taking the plunge by resigning from the Indian civil service in 1921, he wrote to his elder brother Sarat: “Only on the soil of sacrifice and suffering can we raise our national edifice”.

Bose aimed for formation of “a new India and a happy India on the basis of the eternal principles of liberty, democracy and socialism.” He rejected communism because of its internationalism and because he believed that the theoretical ideal found in the writings of Marx could not be applied, without modification, to India. Still, he maintained socialist views throughout his adult life and, on many occasions, expressed his hope for an egalitarian, industrialised society in which the State would control the basic means of production.

In his Free India, Bose envisioned an egalitarian society in which all individuals would enjoy practically equivalent economic benefits and social status and there would not be any distinction among men by virtue of good fortune, parentage, rank and doctrine. In his presidential address at the Maharashtra Provincial Conference held at Pune on May 3, 1928, he said, "If you want to make India really great we must build up a political democracy on the pedestal of a democratic society. Privileges based on birth, caste or creed should go, and equal opportunities should be thrown to all irrespective of caste, creed or religion."

As indicated by Subhas, freedom comprehensively implied political, economic and social freedom. Subhas Chandra Bose valiantly fought for India's freedom but this independence was also an economic necessity for him. He said, "The problem of giving bread to our starving millions - the problem of clothing and educating them – the problem of improving the health and physique of the nation - all these problems cannot be solved so long as India remains in bondage. To think of economic improvement and industrial development before India is free; politically is to put the cart before the horse." According to him, the horrifying poverty, high episode of unemployment was because of foreign domination. In view of this he wanted economic remaking and industrialization on present day logical and innovative techniques.

Subhas Chandra Bose also said, "The moment India is free, the most important problem will be the organising of our national defence in order to safeguard our freedom in the future. For that we shall have to build up modern war industries; so that, we may produce the arms that we shall need for self-defence. This will mean a very big programme of industrialization."

Bose on Emancipation of Women:

Subhas Chandra Bose imbibed the ideals of his political mentor, Deshabandhu Chitta Ranjan and spiritual mentor, Swami Vivekananda in regard to female education and female emancipation and used to refer to the instances of respectable, noble and insightful women of ancient India like Maitreyee, Gargee, Khana and Lilabatee. At the point when Subhas Bose in his firy speeches was upholding for all round liberation of women, movement for women's advancement began to build up speed, Women's Indian Association being established in Madras in 1917. The National Council of Women in India formed in 1925 began to co-ordinate the work of Provincial Women's Council and other societies with the objectives of women's advancement and welfare and to interface India with global development. Netaji's firm conviction was that no nation could truly be free if women did not enter the arena in the fight for freedom in various capacities like serving in hospitals as nurses, looking after wounded soldiers and such other auxiliary roles and they can also take up arms against enemies. So he made the Rani Jhansi Regiment and that too as it didn't fulfill his confidence in complete equity of women with men; he, in the Provisional Government of Azad Hind appointed one woman Cabinet Minister, giving her a position after him in the order of preference.

In the conclusion, we can understand that the credentials of Subhas Chandra Bose as a socio-political thinker can be well traced from his activities, letters, writings and speeches at different phases of the freedom struggle, indicating a process of evolution of his social, economic and political concepts connected with the development of his own mind responding to the shifting environment in India and the World outside. The sum of his ideas and convictions constitutes his philosophy, though he was more of an actionist.

(This Article was written by Sushri. Muskaan Anand, National Coordinator of Students For Service, on the occasion of 125th Birth Anniversary of Netaji Subhash Chandra Bose)

I always felt subash chandra bose is my ideal from my soul. I just prefer to spread his idea in hindi.

Wow! Thank you so much dear for share this type information. such a nice article.

subhas chandra bose was a great personality, there was too many followers of dr. subhash chandra in a country or worldwide.

Thanks for the Article and good information