The Lessons Tiananmen Massacre Teach Us 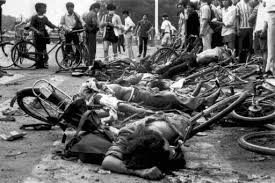 No one knows how much water flowed through Yangtze after 3rd and 4th of June 1989. It is also not known that how many people crushed to death in a bloody crackdown at Tiananmen Square on the eve of 1989. According to estimates thousands of students and youth were killed when communist China crushed one of the biggest democratic movements in its history. The 1989 incident stands as a testimony to the inhuman face of communism. The Tiananmen Square protesters were neither terrorists nor their means of demonstration violent. They were university students and youth resorted to peaceful demonstration. Their demands also were not anti-national or illegitimate. They raised slogans against corruption, crony-ism and nepotism and demanded only transparency and freedom. Nevertheless, they were branded as counter-revolutionaries and accused of trying to subvert the communist government aligning with the western powers. According to communist narrative counter revolutionaries are like rabid dogs and deserve only death. Hence, Chinese authorities resorted to violent measures to quell the democratic demonstration. They used tanks and assault rifle to disperse the million strong crowd gathered in and around Beijing under the pretext of martial law. Soldiers indiscriminately fired at un-armed peaceful demonstrators. Authorities haunted the demonstrators even after the crackdown and many ended up in jail and still continue to be there. The exact number of causalities of the crackdown is also not known to the outside world until today. Deng’s China erected an iron wall and stopped leaking of secrets. He even crushed the dissent within the party and army, many people purged, denouncing them as supporters of counter-revolutionaries.

25years passed after the massacre of Tiananmen Square. One of the largest peace time incidents in the 20th century may be one of the deadliest in human history by a government against its young civilians. But the reports of human rights violations emanating from China indicate that it has not been changed a bit even after the fateful eve of 1989. The Chinese students and youth are not allowed to enjoy many privileges like their counterparts elsewhere in the world i.e. obstacle free internet connectivity and its features like Face book. It is also true that they have Chinese version of Face Book but unfortunately it is under the tight grip of authorities. Furthermore, the crackdown on internet on the eve of 25th anniversary of Tiananmen Square massacre shows the Chinese government’s attitude towards freedom of speech and expression. Interestingly, more than 2 lakh people participated in a rally organized at Hong Kong to mark the 25th anniversary of 1989 massacre. Similar kinds of protests are reported from Macao and Taipei. But there are no reports from mainland China of any protests. It clearly indicates that freedom of speech and expression is curtailed in China.

But it doesn’t mean that no one enjoys freedom and privileges in China. An elite group of youngsters enjoys greater privileges in China they are known as princelings. The offspring’s of all powerful officials of china. They have everything at their disposal, which are denied to the common students and youth. Many of them posses’ great amount of wealth, study at institutions like Harvard, travel in posh cars and spent their holidays at hot spots and work for MNC’s as executives. It shows the pro poor narratives of communists are nothing but a jugglery.

When it comes to Indian context we should ask ourselves that how genuine the communist slogans are? For i.e. Student Federation of India (SFI) flags bare slogans like freedom and democracy but it never condemned the incidents like massacre of Tiananmen in communist states. Further, the defenders of Maoist violence in the name of human rights also should contemplate that what kind of state and rule they are offering for us. Finally, “eternal vigilance is the price of freedom” we should be extra careful to defend our freedom of speech and expression; otherwise it may fall into the hand of inhuman Maoists they are trying to subvert our state and constitution by means of bloody violence.